It is my pleasure to present an interview with aikidoka who studied with O-Sensei and is an author of the book Aikdo Groundfighting: Grappling and Submission Techniques.  I loved the book, and it changed the way I think of my aikido.  The book is available at all major retailers.  If you want to honestly practice aikido, I highly recommend you pick this one up.  I hope you enjoy this email interview. 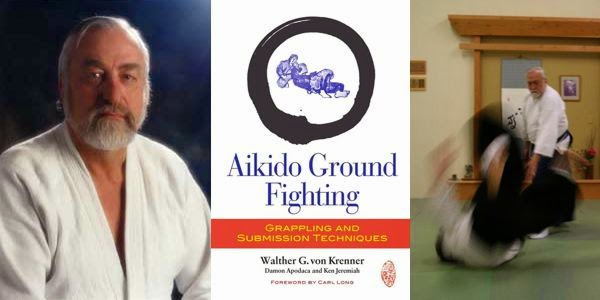 Martial Thoughts: Thank you for taking the time to do this interview. I usually start with the same story. Could you describe your martial history?  How and why you got into martial arts in the first place, and then how you ended up where you are now (martial arts wise).

Walther G. von Krenner: I started Judo in 1956 in Germany. In 1960 after training for a short time in Paris, France  I moved to the USA.  In 1961 or 1962 I was introduced to Aikido and Takahashi Isao Sensei, my first teacher. In 63 I met the founders son and took classes with him. In 1966/7 I moved to japan to train at the founders Dojo while he was still alive and teaching. I returned to the US after his death and lived in Hawaii where I was teaching and training with Aoyagi Shihan.


MT: How were you introduced to Aikido?

WGvK: In 1960/61 I saw a demonstration and decided to study Aikido. For a short while I continued in Judo while I was studying Aikido, but after a year or less I focused on Aikido and quit Judo. I reached 4th Dan in Judo.

MT: Does your particular teaching style have any particular or unique philosophy?


WGvK: We focus on Aikido as Budo, a real Martial Art and its relation to the sword. Much Aikido in our days would be useless in a self defense situation and has deteriorated into a


dance. We believe that a particular technique or Waza should be workable with a Jo, a Sword, a Tanto and bare handed. Another words the Riai or fundamental principle of a particular waza should apply to all those weapons and should be interchangeable. Any Ryu or style that does not have this principle is only a collection of techniques and will not lead to a deeper understanding of the Do of Budo.  The now so popular Mixed Martial Arts will never be a true Budo, it is a fruit salad of techniques and useless as a spiritual discipline.
MT: You ended up taking aikido, but you seem to have a different interpretation of what aikido is compared to what is generally being taught now?  Could you explain a little about how or why it has changed since you started?

WGvK: Our Dojo believes that Aikido is a Budo, as Morihei Ueshiba O-Sensei stated countless times. In some schools in our days I see totally ineffective and useless teachings that are closer related to dancing then Budo. Those techniques require a  Uke that does not know how to realistically attack and is willing to fall without being thrown. Such was not the Aikido I saw the founder perform.
Those people translate “Ai” as Harmony, and harmony means to do anything your Nage wants.  “Ai” does NOT mean this kind of harmony or harmony at all. “Ai” means meeting, or blending together. A large percentage of Aikidoka could not stand for thirty seconds against a Judo or Karate practitioner! They generally excuse this lack of reality by stating O-Senseis Aikido is the Art of peace. You can not be a pacifist if your only choice is being a victim, if you are martially competent  (as O-Sensei certainly was) and you choose to resolve the situation peacefully, which is  one of your choices, then you can call yourself a pacifist or a man of peace.
MT: On that same note, your book goes against the grain of what is taught as aikido, what motivated you to write the book in the first place? 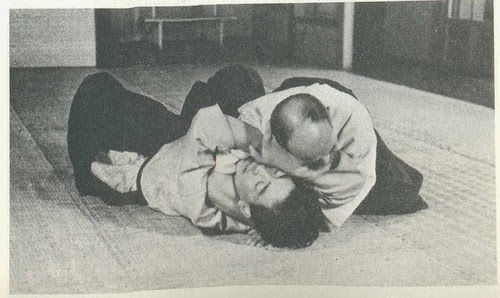 WGvK: Because most fights or confrontations will end on the ground in less than 30 seconds and today’s Aikidoka is helpless and totally defenseless in this situation. There are many photographs of O-Sensei doing ground techniques and he certainly knew how to do them. Masatome Ikeda, one of Hombu Shihan, is teaching the very same techniques in the book. Groundwork is not against the grain of Aikido, it is simply missing from the Aikido that is practiced today. Along with many other things such as realistic Atemi and protecting yourself against realistic Atemi.
MT: Because of the “controversial” nature of the book, how have the responses been?  Has there been a good reception, or perhaps, someone who has said “groundfighting is not aikido?”

WGvK: Most responses were favorable and perhaps 3% claimed ground fighting was not Aikido. This is like saying spelling is not part of writing.
Those are the people I talked about earlier. It is their short coming and lack of Aikido knowledge in general. Most have not been in Aikido long enough to have an opinion. I would like to remind them that I have been 53 years in Aikido and that I studied with the people they only read about.

MT: Do you have a hypothesis or idea why aikido has seemed to get away from the budo that it initially was under O-Sensei?


WGvK: Yes, students have become lazy, undisciplined and lack commitment and pride. Why work for 10 or more years to get good at something when you can be a hero in a video game holding a Joystick and sitting on your butt!


The way you live is the way you train and the way you train is the way you live, those are not two separate things, they are one. Shimizu Sensei in Japan told me one time that “after 15 years you gain a slight understanding” can you see anybody today staying with one thing and dedicate your life to it? Countless times I hear students proclaim this is what I want to do forever! Forever usually is less than a year.This holds true for a lot of things, not just Budo.

MT: As you said, you got the chance to work with people, I've only read about.  What was O-Sensei like on and off the mat?  Do you have a particular memory of him, or a good story (come on I know you do...)?


KGvK: this is a question that I could write much about, but it would be to long, personal and involved. My Aikido Biography entitled “ Walking the Martial Path” published by Quest Books (Theosophical Publishing Co.)  will be released later this year and will address all this and more. So buy the book

MT: Awesome, Keep me informed, and I'd like to do a review form my blog. Besides, the book, not that a book isn't enough, what does the future hold for you in aikido?

WGvK: Well, I am 75 years old, I will teach as long as I can and try my best to keep my Aikido out of politics and the control of organizations that think Aikido needs to be exploited and controlled for money.  I am contemplating a book about Atemi, another facet some can claim is not part of Aikido in spite of the fact that O-Sensei said over and over again that Aikido is 75% Atemi.
MT: Now, I generally think martial arts teaches lessons outside of fighting/self-defense.  How has martial arts influenced your non-dojo life?

WGvK: Since Aikido has been a large part of my life this is hard to say. I live on a beautiful Ranch in a beautiful part of the country, I am free to do what I please, I have been successful in all of my endeavors . If you Google Walther von Krenner you will find other facets of me, but all in all they are centered around my study of Zen and Aiki which I believe have enhanced my life and shaped my lifestyle.
MT: I generally find martial artists love martial arts movies and books.  Since you wrote a book, and I’ve already recommended it to every aikidoka I know, do you have any favorite martial arts movie, or book you’d recommend?
WGvK: Hard to answer. A good movie for Aikido students to watch would be “Aikido no Chikara” (the power of Aikido) it deals with the early part of O-Sensei’s life and would be a good history lesson for those who believe Aikido is not Budo.
As far as books go try “Aikido in daily Life” by Tohei Koichi, also one of my teachers.

MT: Mr. von Krenner, thank you for taking the time to talk to me, and the readers.

WGvK: Thank you for this interview and the opportunity to express my opinion!