Martial arts, in its weird, mystical way, has been a part of fiction probably since there was fiction, and there seems to be only a couple of different ways that martial arts are used: 1. Martial arts explains why a character can do certain deeds, 2. A new martial arts is created that uses fictional martial weapons, or non-human forms , 3. The "Ultimate" martial art where nothing else can defeat it, or 4, As a parody making fun of martial arts, or martial arts movies.  My list includes variations on all four.  They are of my personal favorites, with explanations as to why.  Enjoy. 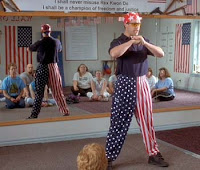 What can you say about techniques that were perfected after 2 seasons in the octagon?  Rex Kwon Do appears in the movie Napoleon Dynamite, when Napoleon goes with his friend Kip to try out Rex's dojo where you are able to learn "the strength of a grizzly, the reflexes of a puma, and the wisdom of a bear."  Rex is brilliantly played by one of those weird character actors that doesn't get used enough Dietrich Bader.  I didn't like the move as a whole, but those dojo scenes had me laughing. 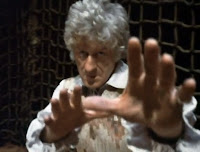 I know I'll probably get my geek card revoked, but I've never been a Doctor Who fan.  That being said, I like the daring of saying there is a martial art done by beings with completely different shapes than humans.  How the good Doctor managed to translate that to a human form is beyond me.  Also, It apparently switches terms between aikido and karate.  Because they're so similar right? 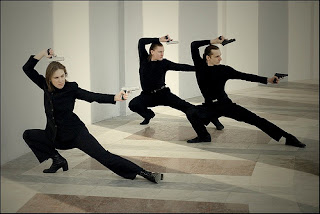 Equilibrium is a pretty good movie despite its Christian Bale-ness.  In this movie, his wooden acting is actually appropriate because it takes place in an emotionless dystopia where he plays a "Cleric" whose job it is to keep people in line with the program, and taking their emotion-blocking pills.  The martial art of Gun Kata is supposed to be based moving to the area of least probability of being shot while engaged in close quarters gun fights.  Its an interesting idea, and it looks cool, but it is ultimately impractical.  However, I do love a good dystopia...and it ends with a sword fight, so there you go. 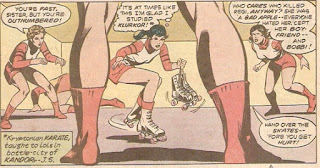 Never heard of this one?  Well you're not alone.  In the 70's/80's (notice the roller skates), in an attempt to make Lois Lane a little less reliant on Superman, she learned the Kryptonian Karate system of Klurkor.  Where and when did she learn this, You might ask.  Why of course in the year she spend in the shrunken city of Kandor.  Only in comics would that make sense.  I've never seen any reference that Kal-El actually knows this art, so maybe Lois can teach him some moves. 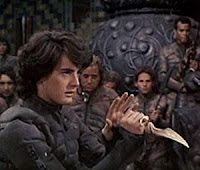 I love Dune, and there is a lot of physical hand-to-hand combat intermixed with all the political intrigue, and Weirding Way.  I found a reference online (you know how that goes), that says there was a martial art called Fremen (the desert guys with the blue eyes) Kempo.  I don't recall it being called that, but they obviously had a specific learnable system of combat with their Crysknives.  Besides where else can you learn to walk without rhythm?

Klingons!  Enough said!  Actually that's not enough, The Klingons may have the most explored Sci-Fi martial art of them all.  Mok'Bara is an overarching martial art that includes both armed and unarmed components.  The armed portion covers the use of typical Klingon weapons like the bat'leth, while surprisingly, the unarmed portion is more like taijiquan, in that its about balance and calm.  There's been a couple scenes of Worf teaching a class aboard the Enterprise-D in what look like some futuristic gi clothes.  There's even a book, which I have to sadly/proudly admit I own, that goes over a bat'leth kata, that supposed to be based on a Chinese Staff kata. 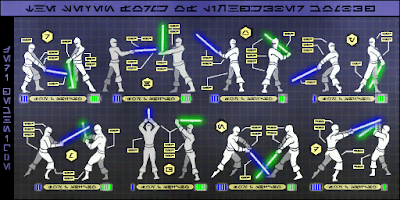 Que the Star Wars theme music!  There may be no more iconic martial weapon to science fiction than the lightsaber.  I tell how old people are by which Star Wars movie they saw in the theater, so you're either Empire-aged, or Jedi-aged.  If you're a young whippersnapper, you're Phantom-aged.  I, like many martial artist my age, were really excited to see what the Jedi in their prime looked like in the prequel movies, cause let's face it, so far in the original trilogy we'd only seen an old man, a cyborg, and a not-quite-trained Jedi.  With the Prequel trilogy we got to see them, and their lightsaber skills on display.  If you really get into the geek-dom of it, there are seven "schools" or forms of lightsaber use.  Most Jedi lean towards one form of the other, but you can see parts of it in all of them.

Okay, back to Star Trek.  If you read some of  the non-cannon fiction, Spock's Vulcan Neck Pinch is part of an overall Vulcan martial art.  I included this one as number 3 because, honestly, touching someone in the right way to make them fall unconscious is the goal of many martial arts.  It is a peaceful, non-damaging way to end a conflict.  O-Sensei would be proud.

Okay, I'm biased for this one.  This is from the Matador series of books by Steve Perry (read my review).  Sumito is a fictional martial art that is unintentionally based on Pencak Silat.  Since I've stared studying Silat, I've come to appreciate the way Steve Perry writes about this art even more.  I included it this high on the list because it seems an imminently practical art, which cannot be said for most on this list.  There is nothing super-human, or even alien about this one.  It just describes the way to move and to use techniques to manipulate a person to do what you want them to do. 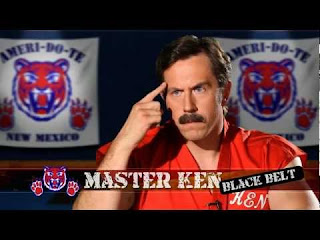 Best of All, Worst of None.  Bat'leth are Bullshit!


If I left out any of your favorites, let me know in the comments, and I can re-edit the post to include "honorable mentions"