4/5 Stars for Bruce Lee The Tao of Gung Fu 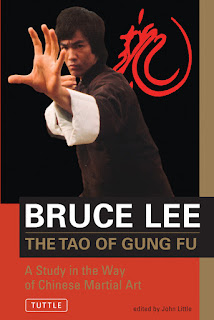 In the interest of full disclosure, I received this book from the publisher for review purposes
Title: Bruce Lee The Tao of Gung Fu
Edited by: John Little
Publisher: Tuttle
Format: Softcover
Cover Price: $19.95 $13.97(US)

Today in America it is our national holiday dedicated to consumerism known as "Black Friday."  It is the day many of us will willingly practice a mixed martial art called "Buy Fu."  It is a modern martial art which focuses on a combination "karate chops shops" and kara "cart-rate."  But seriously, its dangerous out there.  Stay inside.
It also happens to be the anniversary of Bruce Lee's birthday.  He would have been 75 today, and in honor of him, I'm going to review a book of his that was actually written by him during his life time.  It was an early writing, but you can easily see where the now famous and quotable ideas came from.  In fact, most of his philosophy is there already.

The book is an original writing of Bruce Lee's that he intended to publish as a manuscript for Gung (Kung) Fu, to introduce it to more people.  Granted, it wasn't the finished version, but each section was completed.  It wasn't published during his lifetime, but it was the only book he wrote specifically for publication during his lifetime.  The Tao of Jeet Kune Do wasn't intended for publication, and was done so posthumously.

I like that this Bruce's ideas in his own words.  This book was a conscious effort on his part to write to a western audience about kung fu in terms of physicality and philosophy.  As always Bruce Lee's words have a weight of truth to them.  Almost everything in this books can be applied to any martial art.  His words tend to focus more on the striking aspect of the martial arts, rather than the grappling aspect, but it still applies.
One additional little thing I liked was the appendix of the book.  It looked at where Bruce Lee was in his studies at the time of this writing: He had studied Wing Chun for 7 years, Judo for 1 year, ect.  It helped put some of his ideas in perspective of where he was in his own path.

I've read a couple of different versions of Bruce Lee's works recently, so some of the ideas are repeated from other writings.  That isn't to say that it isn't valid or valuable, just that if you're looking for "new secrets from Bruce Lee" this isn't the right place.  In fact, even a lot of the familiar language that we're used to from Bruce are initiated here.  "Be like water" and such.  So it shows almost a prequel to the man and the movies that we've all come to love.

Overall I'm going to give this book 4 out of 5 ninja stars.  I love the philosophy that Bruce Lee believed in and tried to expand on for everyone else.  I think this is a polished look at where Bruce Lee was at this point in his journey.  It gives a very good spotlight of his views at this part of his path, and you can easily see where his more famous and quotable ideas originated.  You can also see how the notes he took in, what became, Tao of Jeet Kune Do started to change his ideas of martial arts.

Posted by Jaredd Wilson at 12:00 AM No comments: 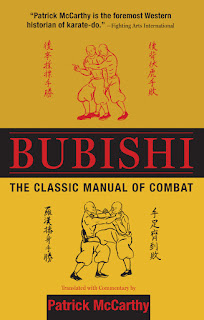 In the interest of full disclosure, I received this book from the publisher for review purposes
Title: Bubishi The Classic Manual of Combat
Translated with Commentary by: Patrick McCarthy
Publisher: Tuttle
Format: Hardcover
Cover Price: $27.95 $19.57(US)

Bubishi is a title that's been hanging around my wishlist for a while now.  It's always been presented to me was as the "Bible of Karate."  Which I don't know quite how to take.  What does that mean?  Is it a series of rules and stories to live by if you're a karateka (person who does karate)?  In my head, it was kind of a Book of Five Rings or an Art of War, but somehow specifically written for karateka.  So I went into this book, not really knowing what to expect.  I have to say, as is more often the case than not, I was pleasantly surprised.


NOTE: The editor just let me know that a new edition will be coming out in May 2016.  So start saving your pennies.

From what I gathered from Patrick McCarthy Hanshi is that the Bubishi was the original hand written Chinese Kung Fu manuals that made their way over to Ryuku islands (what we would think of as Okinawa) to somehow form the basis for the original Okinawan art of Te, which eventually became Karate.  Many of the originators of what today is called karate had their own hand-copied version of the Bubishi, and swore by it.  My interpretation of the book is that there is no one official Bubishi manual, but indeed several versions of it, all of which mostly overlap in material.  What Mr. McCarthy did was to hunt down many of those versions, coalesce them, and offer an modernized interpretation to them.
The book itself is divided into several different sections.  The first involves the histories, stories, and legends of what Chinese martial arts migrated to the islands, and why they each have a piece of validity to them.  He then breaks the articles in the Bubishi into related subjects.  There is a section on history and philosophy, one on Chinese Herbal Medicine, another on Vital Points, and the last section is on Fighting techniques.  There are also lots of pictures of the original manual with translations of the Chinese texts.

The translation and commentary by Mr. McCarthy was definitely worth the book by itself.  He has obviously put a large amount of time and energy into this product.  In fact the version I read was the third or fourth re-write from the original, with more work and insight having been poured into each new edition.  I enjoyed the frank and thoughtful observation of the various theories of how the Bubishi and the Chinese arts made they way to the Okinawan islands with a critique of the value of each theory as to its validity.
He also went to great troubles to get an accurate interpretation of  the writings themselves.  As he states many times, the older language was not only hard to translate by itself, but often rife with terms only meaningful to those of a specific dialect of Chinese.  I guess this is how a lot of the secrecy and Oriental mystique gets started, but I did enjoy that Indiana Jones research aspect to his contribution to the story.
The portion on pressure points and fighting techniques seemed, to me, to be of the most universal use to martial artists of any ilk.  The pictures and descriptions would have to be gone over, and dissected many time before they would reveal their wisdom.  But, isn't that one of the fun parts of martial arts?

I am not a subscriber to traditional Chinese medicine in anyway shape or form, just because I haven't found any science to back it up (did I mention I'm a science teacher), so that portion of the book held no interest for me.  I understand as a historical look at Karate, and the portion of Chinese culture that gave rise to Karate, it has value.  And I understand that it was part of the original Bubishi, so why it should be included, but for me, it was easily overlooked.  Maybe one day I'll go back and look at it more in depth.  In some ways I feel bad because I get the feeling that Mr. McCarthy had the most trouble, and put in the most effort with that section of articles of the Bubishi.

I do believe that this book, and Mc. McCarthy's version in particular, probably has a lot to give any martial artist.  I don't practice karate, but the ideas of history, philosophy, pressure points, and techniques presented seem to be pretty universal, and deeper meaning than the once-over would reveal.  As such, I'm going to give the book 4 out of 5 Ninja Stars, just because I didn't find the Traditional Chinese Medicine portion useful.  I'm sure there are people out there that will scoff at me for that, but that's my opinion.
Posted by Jaredd Wilson at 6:05 PM No comments: