When I started out in aikido, there seemed to be an endless number of techniques to learn.  Different locks, different throws, and then different directions to perform each of these.  Add in different attacks that initiate the technique, and the number multiplies.  To add even more to it, different systems/schools have slight variations on techniques, and call them each a new name.  Maybe that's why I like kenjutsu.  There's only so many ways to effectively attack or defend.  Learning them is easy, mastering them is nigh impossible.
Now that I've been studying aikido for a while, I've whittled the number of "techniques" down to two.  Irimi (entering motion) and tenkan (turning motion).  The rest is just controlled waving your arms around.  O-Sensei had said that aikido only has one technique.  Many people have interpreted it as being ikkyu.  I believe that aiki by itselft is the one technique, but that's my interpretation.  My point in all of this is that the technique means less and less to me the longer I practice.  What has become more important to me, is the principles behind the techniques, that guide the technique, that are demonstrated in the technique.


The purpose of technique 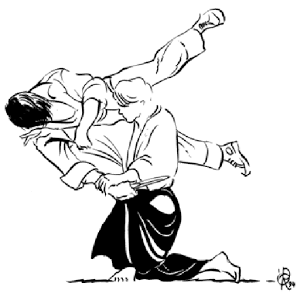 I honestly believe that it will be almost impossible for me to pull off a technique in a real situation.  My personal training right now, is to add more realism to the attacks.  As in less cooperation on uke's part.  The more I practice with realism, the less technique I do.  That isn't to say, I'm getting hit in the face, or punched in the gut... too much.  In fact, I'm often able to not be hit , and either eliminate the attack, or redirect the attack away from me.  If I have the available time and correct distance, I can also control the attacker in some way.  It is very rarely a "technique."  In fact it doesn't end up "looking" a lot like aikido.  It could be that I haven't gotten to the level of training and mental conditioning where it will look like aikido.
The way I've come to see it, techniques are available opportunities.  I can never go into a situation thinking "Hah! I can do nikkyu."  But, if the opportunity presents itself, with his wrist in front of me, I'm going to apply the wrist lock.  The principles of movement and range that nikkyu teaches is what is important.  The same could be said of any of the techniques I know.

Of course, maybe I am simplifying it too much.  This could be because I've trained enough to where I don't need to spend all my brain activity on the smaller thing, like proper foot placement, how to step, where to step, what is my arm supposed to be doing, that kind of thing.  Because I've hiked  those neurological pathways enough, I've got a pretty good handle on those details.  My brain can spend time on the larger, more over-encompassing issues.  So the end result is, through years of training and mental conditioning, I've learned enough to look past the individual technique, to what the patterns of movement and thought are, and what they have in common with other techniques.
Posted by Jaredd Wilson at 12:00 AM