5 Books Every Martial Artist should have


5 Books every martial artist should have (own, not just read)

I love reading about martial arts.  Martial arts, martial artist, martial philosophy; doesn’t matter.  I   I have a modest, but extensive library, and I’m expanding it as much as my shrinking budget allows.  I have to admit, I have a bias towards Japanese martial arts, so that is going to be where my emphasis lies.  In our dojo, I often have people asking about what books to read, or which ones are worth it, or cover a particular martial art and so on.  I’ve given enough advice to enough people, so I decided to share some with you.  What follows is a list, and explanation, of 5 book, which should be on the shelf of everyone who considers themselves a martial artist.  It is by no means exclusive, nor is it intended to be.  In fact, I had a hard time just picking 5.  If you have others to fill in, please add them in the comments.  And make sure you tell us why your book should be included on the list.
devour the subject. 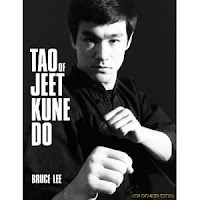 The first MMA?  BruceThis is the story of Bruce’s martial studies.  He doesn’t claim them as his own, only his own collection.  If you look closely you can see the genius of Bruce Lee.  He took information from everywhere, and incorporated them into his martial arts.  He watched boxing, fencing, and other martial arts.  He blended throws with strikes into a comprehensive martial art.  Besides that, there is a nice blend of technique and philosophy.  My favorite part is from the forward.  Bruce Lee says read this book, and then throw it away.  Meaning, don’t dwell on this.  It is my journey/journal.  Take what you can from it, and be done with it.

4.  Comprehensive Asian Fighting Arts-Donn F. Draeger & Robert W. Smith
This is the first book in English where someone took the study of the history martial arts seriously.  If you have an interest in the history of any of the Asian martial arts, start here.  This book is also credited with bringing many of the more obscure Asian arts to the attention of the West.

3. Living the Martial Way-Forrest E. Morgan
This was actually one of the first martial arts books I’ve read.  I did so because it came recommended by a friend and Sensei.  Mr. Morgan breaks down the ideals of warriorship and how to apply it to today’s life.  If you want to make martial arts your life, and not just something you do on Tuesdays evenings, this book is for you.  I still go back and read it when I want inspiration.

2. The Art of War-Sun Tzu
There are many, many translations of this one, and they are all slightly translated differently.  Any way you read it, this is the classic that is still looked at today.  It breaks down conflict to its most basic elements.  Everyone involved in warfare and combat has studied this, so should you.  There are innumerable bits of wisdom and strategy to be gained from this one.

Again, lots of translations, each one translates it a little different.  The intent is always the same, but the nuances are what separate the translations.  I'm personally fond of the William Scott Wilson's translation.  The only reason Go Rin No Sho (Book of Five Rings) was raised above The Art of War was due to the fact that Musashi was more of what we envision a martial artist to be; a lone warrior.  Sun Tzu was more of a military strategist.  This book is so influential, that business executives are now requiring their strategists to read it.  They view the negotiation table as a battlefield.  The strategy should be the same.
Posted by Jaredd Wilson at 3:00 AM