Review of "On the Warrior's Path" 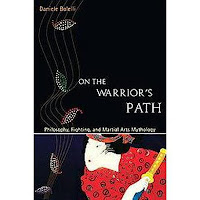 I am an avid reader of martial arts books, much to the detriment of my wallet, my bookshelf, and my wife.  I break the books I read into two categories: Classics and Modern.  Classics include The Book of Five Rings, The Art of War, Hagakure, and other such ancient and complex writings.  Modern covers all the books written by people trying very hard to show martial arts in a modern light: what they are, why they are, and what use they are to modern man.  However, even among the modern books are a few important tomes that I label as modern classics.  These are books that describe the process of becoming a martial artist or use martial arts philosophy in a way that make the esoteric ideas readily accessible to modern students.  Living the Marital Way by Forrest E. Morgan and Zen in the Martial Arts by Joe Hymas are the two that immediately come to mind.  I would like to add another to my list of modern classics, On the Warrior’s Path by Daniele Bolelli.
It is an honest, humorous, and extremely human way to look at martial arts.  Mr. Bolelli does an amazing job of describing the path of a modern warrior, what is a warrior (in his interpretation), and what that warrior should do.  He uses quotes from everyone from Fredrick Nietzsche to Pearl Jam to explain the very personal philosophy of the warrior.  He talks about the guilty pleasures of all martial artists, the UFC and martial arts cinema.  Specifically, he describes martial arts movies in terms of warriors, by classifying the warriors as one of six archetypes based on motivation.  There are many sections in various chapters devoted to how Bruce Lee changed aspects of martial arts movies and how some movies are more than just flashy wire works and actually exemplify warrior philosophy.  The last two chapters are devoted to how to apply the lessons learned through martial arts to other aspects of life.  He also describes the Taoist teaching of how martial arts should not be a separate part of your life, how one shouldn’t compartmentalize your life.  There should simply be life.
His writing style is a wonderful mimicry of his personal hero, Nietzsche, constantly voicing the presumed questions and opinions raised by the reader.  Doing this creates a very open atmosphere throughout the book, including maybe the most unorthodox paragraph in the English language where he compares the UFC to going down on a woman (but he does it in the beautiful, artistic, deeply Italian way… uh, the comparison, not the cunilingus.)  It feels more like you’re having a beer in a pub with him, rather than listening to a college professor lecture on martial arts philosophy.  You also get the feeling that the questions he is raising are ones he has encountered on his journey and that these are his answers – not everyone’s – but if they help you, have at it.  He alternates between the humorous and the serious seamlessly; and in fact, in the last chapter, he discusses why this should be done in all aspects of life.  My one small critique is I think you have to be an experienced martial artist to fully understand a lot of his discussions.  This book is not written for a beginning martial arts student, but for a reader that can share in some of the examples that he presents.
Overall, however, if you are looking for a good martial arts philosophy book, I would highly recommend this book to everyone regardless of martial arts style.  I cannot give this book enough high praise and compliment.
Posted by Jaredd Wilson at 8:19 PM